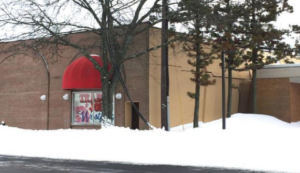 What do you think caused the roof of this store to collapse and the walls to bulge? The direct hazards to workers posed by snow and ice are obvious. Workers can slip and fall on these substances. And working in snowy conditions can expose workers to cold stress. But even in the confines of a warm, dry building, snow can endanger them if it builds up on the roof and causes a collapse.

A lot of snow, particularly if it’s heavy and wet, can compromise the roof’s structural integrity. And ice dams can keep melting snow from draining off the roof, causing leaks inside.

These pictures show a Trader Joe’s store in New Jersey whose roof collapsed from the weight of snow that fell during a recent blizzard. In addition, three of the store’s walls buckled. Fortunately, the store was closed and no one was hurt. But imagine what could’ve happened if there had been workers and customers inside the store at the time.

For example, Québec’s health and safety commission released a 100-page report on the collapse of a snow-covered roof on a food distribution warehouse. Three workers were killed. The report concluded that a decorative awning acted as a wall and allowed snow to build up on the roof. The snow and ice accumulations exceeded the roof’s capacities, causing its failure [Gourmet du village Morin Heights, The Canadian Press, Nov. 20, 2008].

9 Tips for Removing Snow from Roofs

To reduce the chance of a roof collapse, it’s important to know your roof’s load limit. If you don’t know the load limit, have a civil or structural engineer inspect it. If the snow and ice has exceeded the roof’s load limit, allowing workers and equipment onto the roof to remove the snow may cause a collapse.

Here are nine tips workers should follow when they clear snow and ice from roofs:

In addition, a hazard alert from OSHA recommends that you plan ahead for safe snow removal from building roofs by answering these questions: