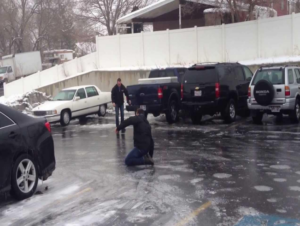 It’s no wonder that this man slipped and fell in this icy company parking lot. What should the company have done to prevent this slip-and-fall? Winter weather means snow and ice, which can cause slips-and-falls. So this time of year, it’s important to take steps to ensure that outdoor areas of the workplace, such as stairs, sidewalks, parking lots, etc., are clear of snow and ice or treated with sand or de-icer. Otherwise, workers, customers, visitors, etc. may take a spill and injure themselves.

This picture shows a company parking lot in Utah, which resembles an ice skating rink due to the coat of ice that seems to cover the entire lot. Given these conditions, it’s no surprise that the man in the picture slipped and fell.

This minor incident could’ve been prevented if the company had spread de-icer or salt to melt the ice and prevent new ice from forming. In addition, the company could’ve spread sand in the lot to provide traction for anyone walking there.

Canadian OHS laws require employers to protect workers from foreseeable hazards, such as snow and ice that can cause slips-and-falls. Failing to take reasonable steps to protect them from such hazards, such as shovelling the snow to clear a walkway or spreading salt/sand on ice, could result in liability in a number of ways.

First, you could be liable for a safety offence, especially if a worker should get injured in an icy slip-and-fall.

Example: A steel mill worker was walking along a designated walkway when he slipped and fell on a build-up of ice in a slope across the walkway, sustaining injuries as a result. The steel company pleaded guilty to failing to keep a walkway used by workers free of hazards and/or accumulation of snow or ice and was fined $60,000 [Essar Steel Algoma Inc., Ontario Govt. News Release, July 6, 2016].

Don’t forget that icy ground can impact not only people trying to walk on it but also equipment operating on the slick surface.

Example: A worker was working indoors near a loading door while a co-worker was bringing in stacks of large plastic containers on a forklift. The forklift became unbalanced due to a build-up of snow and ice on the ground. It tipped and crashed into the loading door, injuring the worker inside. An MOL investigation found that the company failed to keep the ground in the area clear of ice and snow. It was found guilty of an OHS violation and fined $50,000 [ABC Interior Systems Inc., Ontario Govt. News Release, Feb. 23, 2011].

Second, visitors to your property could also slip and fall on ice. And under so-called “occupiers’ liability” laws, you could be liable for their injuries, especially if you knew about the hazard.

To protect workers from having a heart attack while they’re clearing snow and ice from your outdoor areas, give them these tips. Also, take steps to protect them from cold stress while doing such work.