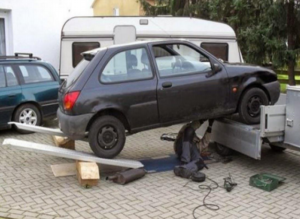 This worker could easily be killed if the car falls off these rigged up jacks. How should he have elevated the vehicle instead? In this picture, the worker has used a variety of materials and equipment to elevate the car so he can work underneath it. But the precariously perched car could very easily fall—and just as easily crush him to death.

The worker should be using one or more jacks to elevate the car safely. But even the use of jacks can be hazardous if they’re not used correctly.

Example: While a worker was changing a tire on a tractor, the jack failed. The tractor fell on the worker, injuring his spine and paralyzing him from the waist down. At the time, there were no blocks in place in case the jack failed. His employer pleaded guilty to not using blocking to protect workers. The court fined it $22,000 [R. v. T & L Den Brok Enterprises Inc., [2014] SKPC 97 (CanLII), April 29, 2014].

To ensure that workers safely use jacks when working on vehicles or equipment in your workplace, have them follow these tips:

Example: According to a BC hazard alert, the front end of a semi-truck was jacked up and left supported by a pair of jack stands. The jack stands failed while a worker was underneath it. One side of the front end dropped onto him, causing serious crushing injuries. An investigation found that none of the workers knew the weight of the truck’s front end (6 tonnes), where to find that information or the rated capacity of the jack stands that were used (3 tonnes).

5. Visually inspect the jack before each use by checking for abnormal conditions such as cracked welds, leaks and damaged, loose or missing parts. Don’t use a jack that’s damaged, worn or operates abnormally. Any sign of hydraulic fluid leakage is sufficient reason to remove the jack from use.

10. Once suspended, vehicles and equipment should be properly immobilized, blocked or secured against accidental movement. Otherwise, they could fall on workers underneath them.

Example: A worker in Ontario was replacing a tire on an excavator using two jacks to lift its rear. There were no other stands supporting the vehicle. While he was underneath, the excavator tipped off the jacks, fatally crushing him. The company and its president pleaded guilty to failing to ensure that the excavator was securely and solidly blocked to prevent it from moving or falling on the worker. The court fined the company $75,000 and the president $10,000 [Holmes Tire Inc. and Michael Holmes, Govt. News Release, Aug. 14, 2012].