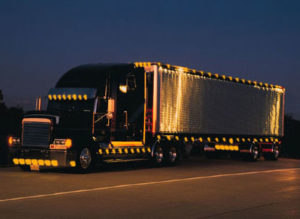 One of the biggest safety hazards that commercial truck drivers face is fatigue from driving for extended periods of time. Obviously, ensuring that drivers get enough sleep is the best way to address this hazard. But how and when drivers go to sleep may be important.

A recent study by the Sleep and Performance Research Center at Washington State University on behalf of the Federal Motor Carrier Safety Administration placed 53 male commercial drivers ages 22 to 40 in good health and not significantly overweight into three groups, each having the opportunity to sleep 10 hours per day.

During the study, participants slept, ate and had blood drawn within the confines of the sleep laboratory. They weren’t allowed contact with the outside world—no cell phones, email, visitors, live television, radio or Internet.

The test subjects also drove a 40-minute route in a driving simulator, took a 10-minute reaction time test and completed a performance test involving matching numbers to symbols. And they underwent behavioral testing to measure sleepiness, mood, positive and negative emotions and performance and effort.

The researchers found that commercial drivers who divided their sleeping time into two sessions each day reported feeling less sleepy during waking hours than workers who slept in one consolidated period during the daytime.

And although all three groups performed similarly in the simulated driving, reaction time and performance tests, the commercial drivers in the daytime sleep group were sleepier and had increased blood sugar levels and higher testosterone levels at the end of the week. (High testosterone levels in older men may increase the risk for developing heart disease.)

Read more about the hazards of drowsy driving and how employers can be held liable if an exhausted worker gets into a traffic accident after his shift. You can also give workers this Model Notice on recognizing the signs of fatigue.

And learn about how to implement a fatigue risk management system, including a Model Fatigue Management Policy.

Go to Safety Smart for a safety talk on adjusting to shift work. Not a Safety Smart member? Sign up for a free 14-day trial.