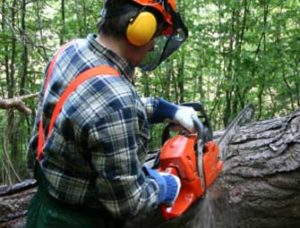 A small business was hired to cut and harvest logs from a woodlot. A worker was cutting trees down and topping them, while the business owner was operating a skidder. The worker cut the first branch off an ash tree and proceeded to cut the second branch off; the owner hooked the cable to the log to prepare it to be moved by the skidder. The worker signaled that the owner could safely begin pulling the log and stepped back. The owner started to winch the log with the skidder. But as soon as he did so, the worker fell backwards and was unresponsive. He was pronounced dead at the scene. An MOL investigation revealed that a number of “chicots”—that is, a dead tree, or a dead limb of a tree that may endanger a worker—had been left in the area where the ash tree had been felled. Also, the worker hadn’t cut the second limb of the ash tree all the way through. So when the owner started to winch the log with the skidder, the log and the attached limb struck a chicot that had been left standing, which fell over and struck the worker. The owner pleaded guilty to a OHS violation and was fined $10,000 [William Witter, Govt. News Release, Jan. 26, 2017].