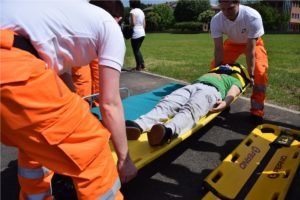 A worker noticed irritation on his left hand at work. The next day, his hand was swollen and had a rash. Believing some chemical got into his glove to cause the reaction, he filed a workers’ comp claim, which was denied. But the Appeals Commission found that the weight of evidence supported that there was an employment hazard related to the chemicals to which the worker was exposed in his employment. Exposure to these chemicals on the job resulted in swelling of his whole left hand and fingers, erythema, blisters, warmth and tenderness. Thus, based on the weight of the medical and other evidence, but for the worker’s exposure to those chemicals, his injury wouldn’t have happened. So the Commission concluded that his severe skin reaction was covered by workers’ comp [2016-0351 (Re), [2016] CanLII 31739 (AB WCAC), May 25, 2016].