Robot Crushes Worker to Death at VW Plant in Germany 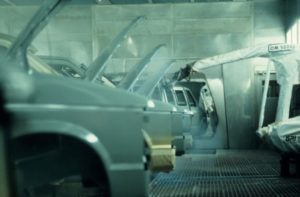 The basic premise of the new movie Avengers: Age of Ultron is that a robot turns against humans and decides to exterminate them. Far-fetched idea, right?

Well, that threat suddenly seemed very real when news recently broke of a robot killing a worker at a car factory in Germany.

On June 29, 2015, the robot killed a contractor at one of Volkswagen’s production plants in Baunatal, about 100 kilometres north of Frankfurt.

The 22-year-old was part of a team that was setting up the stationary robot when it grabbed and crushed him against a metal plate. The cause of the incident is still being determined but initial conclusions indicate that human error was to blame, rather than a problem with the robot.

The robot in question can be programmed to perform various tasks in the assembly process. It normally operates within a confined area at the plant, grabbing auto parts and manipulating them.

Such incidents could become more common if the use of robots in manufacturing increases as predicted by a study.

So if your workplace uses industrial robots, you should ensure that you’re familiar with the requirements in the OHS laws for robots and take the following steps to comply with them:

Step #3: Develop safe work practices for the installation, operation, teaching and maintenance of industrial robots and robot system; and