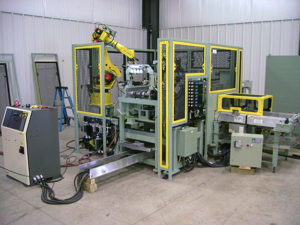 We may not have to fear the “rise of the machines” as predicted in the “Terminator” series of movies. But if the use of robots in manufacturing increases as predicted by one study, we may have to fear a rise in safety incidents involving industrial robots and robotic equipment.

For example, a 20-year-old woman who was a temporary worker at an Alabama automotive parts manufacturer was crushed to death inside a robotic machine. Regina Elsea died just two weeks before her wedding day.

Elsea and three co-workers entered a robotic station on June 18, 2016 to clear a sensor fault when the robot abruptly restarted. The machine pinned her between two welding tips on a robotic arm, which pushed her from the rear into another machine.

OSHA investigated the incident and recently issued citations for 23 willful, serious and other-than-serious violations to the manufacturer. It also cited two staffing agencies for two serious safety violations each. Collectively, the three companies face more than $2.5 million in penalties for the federal OHS violations, which include exposing workers to caught-in, struck-by and crushing hazards by allowing them to enter a robotic cell without shutting down and securing hazardous stored energy according to safety procedures.

A similar incident happened at a VW plant in Germany in 2015.

And robot incidents have also happened in Canada. For instance, a supervisor for a manufacturer of metal auto parts in Ontario told a maintenance worker to fix an overheating electrode in a robot cell. The worker entered the cell through the light curtain and without locking out power to the robot. While positioned on a railing by the conveyor belt, the robot pressed into his back and caused serious and permanent injury. The manufacturer was convicted of three violations and fined $270,000. The court found that maintenance workers were expected to make a judgment call about how to fix the equipment—if it was a “quick fix,” the practice was to not follow LOTO and if it was a longer job, then lockout/tag out would be done [Matcor Automotive Inc., Govt. News Release, Aug. 17, 2016].

The lesson: If your workplace uses industrial robots, you should ensure that you comply with the requirements in the OHS laws for robots, such as by: