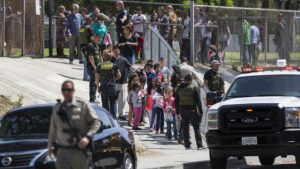 Violence can erupt in a workplace for various reasons. A pair of recent tragedies in the US illustrate two types of workplace violence threats.

Disgruntled former employee. If an employee believes he’s been unfairly fired or otherwise disciplined, or that he’s not being treated properly in the workplace, he may lash out violently, going after the people he blames for his mistreatment (such as supervisors and members of senior management.

On April 8, 2017, a trainer was fired from an Equinox gym in Miami, FL after a workplace altercation. He was escorted from the premises. But he soon returned to the gym with a handgun and shot his two supervisors before shooting himself. All three died.

Estranged spouse. When a couple has become estranged, one party—usually the male—may attack the other in her workplace, especially if there’s a history of domestic violence in the relationship. And too often innocent co-workers or others get caught in the crossfire.

On April 10, 2017, a teacher’s estranged husband entered the elementary school where she worked in San Bernadino, CA. He went to the front office, telling them he needed to drop something off with his wife. There was no indication he was armed at the time.

He went to his wife’s classroom and opened fire on her. He then killed himself. The wife died as did an eight-year-old student who was standing near her at the time. A nine-year-old student was injured and is in the hospital.

For more on workplace violence and its various forms, see these OHS Insider resources:

Want access to all the Canadian safety compliance resources that the OHS Insider has to offer, such as the articles and tools mentioned above? Sign up for a free trial membership now! [/box]