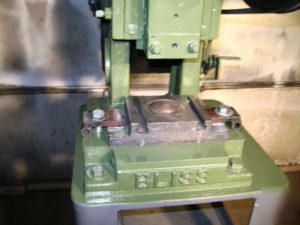 A worker was helping a press operator on a hydraulic press at a railroad manufacturer’s plant. The helper saw a loose machine component behind the machine’s punch line. He thought the operator had stopped the operation of the press and so he reached under the punch line to retrieve or adjust the component. But the operator activated the press, which pinched the helper’s arm and caused a permanent injury. The press had a safety feature that used an infrared light beam, which stopped the press when something was inside its surveillance area. An MOL investigation found that at the time of the incident, the beam hadn’t been properly adjusted and so didn’t provide protection to workers. In addition, the workers involved in the incident didn’t get training on how to operate the press. The manufacturer pleaded guilty to failing to provide information, instruction and supervision to a worker to protect his health and safety and was fined $140,000 [National Steel Car Ltd., Govt. News Release, April 28, 2014].