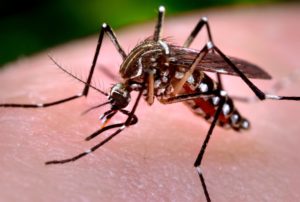 In the summer, you must protect workers who work outside from not only heat stress but also various insects that can bite and spread diseases, such as Lyme disease and West Nile Virus.

Lyme disease is caused by a bacterium that’s transmitted by the bite of an infected blacklegged tick (also called a deer tick) or western blacklegged tick. These ticks are very hard to see.

The first sign of Lyme disease is usually a circular rash that looks like a bull’s eye. This rash occurs in about 70-80% of infected people. We have additional information on the other symptoms of this disease and the workers most vulnerable to it.

According to a recent hazard alert from Ontario’s Ministry of Labour, employers should ensure that workers do the following to avoid tick bites:

West Nile Virus is mainly transmitted to people through the bite of a mosquito that has become infected by feeding on the blood of birds carrying the virus.

Most people who are infected don’t have symptoms; approximately 20% will develop noticeable symptoms and have West Nile Non-Neurological Syndrome. This syndrome can start out as a flu-like illness with symptoms including headache, body aches, nausea, vomiting, skin rash and swollen lymph glands. These symptoms usually resolve within 3 to 6 days.

A bulletin from Alberta on West Nile and workers recommends that employers: