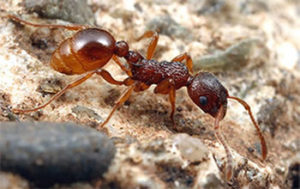 Workers who work outdoors in the spring and summer are exposed to various hazards, including not only heat stress but also various insects that can infect workers with diseases such as Lyme disease and West Nile Virus. And even without the risk of infection, just the bite of some bugs can be very unpleasant.

A good example of such insects is fire ants.

According to a bulletin from WorkSafeBC, European fire ants (Myrmica rubra) are small reddish-brown ants native to Europe and Asia. But they’re also present in parts of Canada, particularly in BC.

Fire ants are very aggressive. If their nests are disturbed, they swarm quickly and deliver painful stings that can inject venom under the skin.

After a sting, a burning sensation develops and can last from 30 minutes to two hours. The burning is followed by itchiness that can last up to a week. At a minimum, stings cause swelling, redness and discomfort. In rare cases, they can result in a severe allergic reaction.

Anyone who disturbs fire ant nests is at risk of being stung. Fire ants may be found in places such as:

To help prevent workers from being stung by fire ants, instruct them to wear clothing and footwear that cover exposed skin, such as long-sleeved shirts, long pants, socks, closed-toe shoes and gloves. In addition, workers should tie pants’ bottoms or tape them to socks or boots.

If a worker does get stung by a fire ant, he should brush the ants away from the skin with a gloved hand or cloth. Don’t crush the ants—it’ll only encourage more of them to sting. Taking an antihistamine can relieve minor swelling and irritation. Workers should see a doctor if the symptoms get worse.