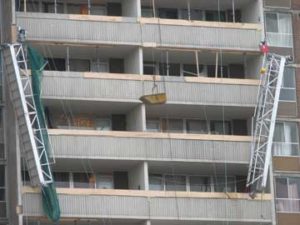 A project manager who oversaw a construction crew involved in the fatal Christmas Eve scaffolding collapse was convicted of four counts of criminal negligence causing death and one count of criminal negligence causing bodily harm. The court ruled that the manager knew that fall protections weren’t in place, but allowed his workers to board the swing stage anyway, showing “wanton and reckless disregard.” A worker testified that the manager didn’t insist crew members be attached to lifelines and had asked him to lie about the incident afterwards. The construction company in the case, Metron Construction Corp., previously pleaded guilty to criminal negligence causing death and was fined $750,000. The company that supplied the swing stage, Swing N Scaff Inc., was fined $350,000 for failing to ensure the platform was in good condition [Vadim Kazenelson, CBC.ca, June 26, 2015].