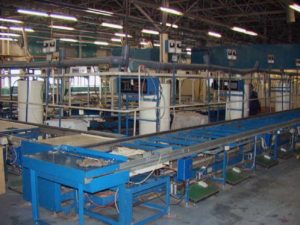 A worker at a manufacturing facility was on a production line of processing equipment used to mix, heat, form and cut plastic into small pellets. Some of the heaters near the die on the line stopped operating. A plant electrician repaired the wiring. Elsewhere on the line, the heaters remained operational. The hot molten plastic caused a buildup of pressure and gases at the blocked die and screen changer. As part of the restart procedure, the worker changed the screen, releasing hot liquefied plastic and causing second degree burns to multiple parts of his body. He also inhaled the hot gases, resulting in internal injuries. The production line’’s screen changer wasn’t equipped with a shield or guard. The manufacturer pleaded guilty to violating the Industrial Establishments Regulation and was fined $80,000 [Colortech Inc., Govt. News Release, Nov. 26, 2014].