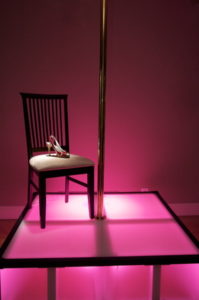 If you think construction workers and miners face danger on the job, those professions have nothing on the safety hazards faced by strippers in the clubs where they dance!

Ok, I’m being facetious. Clearly, strip clubs don’t contain the same kinds of safety hazards or degree of danger as many other kinds of workplaces—but that doesn’t mean they’re safe.

In fact, strippers in Portland, Oregon are appealing directly to the government for improvements in the conditions of the clubs where they work.

For example, Elle Stanger, a stripper who’s been active in the movement, says “Some of the buildings are literally dilapidated and not maintained. You have entertainers that could injure themselves from broken glass on the stage, poor wiring with the sound system. We just want to get these workplaces up to a minimum safety standard at least.”

The strippers are lobbying for various safety improvements, including requiring strip clubs to comply with mandatory OHS standards by providing safety measures such as:

Prostitutes in Canada successfully challenged criminal laws barring certain aspects of prostitution, which they claimed endangered them. And the Supreme Court of Canada agreed, ruling that these laws violated prostitutes’ Charter right to security by imposing dangerous conditions on prostitution.

For example, the laws prevented prostitutes from taking reasonable steps to protect themselves from the risks related to this activity, such as by hiring drivers or bodyguards. In addition, the Court found that these laws essentially forced prostitutes to work alone, which makes them especially vulnerable [Canada (Attorney General) v. Bedford, [2013] SCC 72 (CanLII), Dec. 20, 2013].