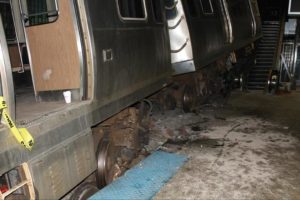 A recent train derailment in Chicago illustrates the hazard of worker fatigue—and the importance of thorough investigations of incidents. (Fatigue was also a factor in a NY train derailment that occurred in Dec. 2013.)

On March 24, 2014, a Chicago commuter train crashed at O’Hare International Airport, jumping off the tracks, going through a barrier and climbing an escalator. More than 30 people were hurt but none of the injuries were serious. However, the crash caused about $6 million in damage.

National Transportation Safety Board investigators said the train operator, who’d been working as such for about two months, admitted falling asleep before the crash. (She often worked an erratic schedule, filling in for other Chicago Transit Authority employees.) And even worse, she acknowledged that she’d previously dozed off on the job in February during another incident in which she passed a station without stopping.

But the CTA said it was unaware that the operator was asleep during the Feb. 1 incident and would have taken harsher disciplinary measures against her had it known. Because the February violation was the operator’s first safety infraction, she was issued a written warning.

It appears that the investigation of this near miss solely consisted of a supervisor’s speaking to the operator, who claimed only to have “closed her eyes” for a moment. That revelation should’ve put the supervisor on notice that fatigue might have been a factor in the incident and sparked a fuller investigation.

There are two key lessons safety professionals can take away from this situation: