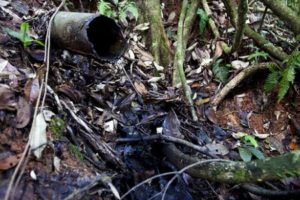 You’d think that Canadian companies have enough to worry about when it comes to complying with the various environmental laws in Canada and avoiding liability for violations of those laws. But a recent court decision out of Ontario indicates that Canadian subsidiaries of foreign companies may also ultimately be on the hook for judgments for environmental harm committed outside of Canada. Here’s a look at that decision and its implications.

What Happened: People in Ecuador sued Texaco for polluting a region of the Amazon by four decades of oil extraction activities. Chevron, a US corporation, acquired Texaco in 2001. In 2011, the plaintiffs won and Chevron was ordered to pay them damages of approximately $9.51 billion (USD). This judgment was upheld by an Ecuadorean intermediate court of appeal. When Chevron refused to pay, the plaintiffs then sued it and its wholly owned but indirect subsidiary Chevron Canada in an Ontario court for recognition and enforcement of the Ecuadoran judgment. But the court dismissed the lawsuit, ruling that although Chevron Canada does have assets in the province, a subsidiary’s assets don’t belong to the parent company. So the plaintiffs appealed.

What the Court Decided: The Ontario Court of Appeal reinstated the lawsuit, ruling that the Ontario courts had jurisdiction over Chevron and Chevron Canada and so there should be a hearing on the merits to determine whether the foreign judgment should be enforced against Chevron Canada.

The Court’s Reasoning: The court explained that under the “real and substantial connection test” for the recognition and enforcement of foreign judgments, the focus is on the foreign jurisdiction—not Ontario’s connection to the legal dispute. That is, the issue is whether the foreign court that issued the judgment had a real and substantial connection to the action or parties. Once that connection has been established, “the analysis shifts to a consideration of whether the judgment is enforceable in Ontario as a matter of domestic law,” said the court.

In this case, the Ecuadoran judgment against Chevron passed the real and substantial connection test and so an Ontario court had jurisdiction to determine on the merits whether that judgment against Chevron may be recognized and enforced in Ontario. But Chevron Canada, noted the court, wasn’t a party to the Ecuadoran judgment. However, Ontario courts had jurisdiction over the subsidiary because of its physical presence in the province and the fact it was carrying on business there. In addition, the court recognized an “economically significant relationship” between Chevron Canada and Chevron, its parent company. Whether the corporate veil should be pierced and Chevron Canada’s assets used to satisfy the Ecuadoran judgment against Chevron was another matter and not relevant at this stage of the lawsuit where only the court’s jurisdiction—not the merits of the lawsuit—was at issue, added the court [Yaiguaje v. Chevron Corp., [2013] ONCA 758 (CanLII), Dec. 17, 2013].

The plaintiffs in Yauguaje went to court and won and now are simply trying to collect what the Ecuadoran court said they’re entitled to receive. But as the Ontario Court of Appeal noted, even before the Ecuadorian judgment was released, a Chevron spokesman said the company intended to contest the judgment if it lost. He said, “We’re going to fight this until hell freezes over. And then we’ll fight it out on the ice.”

Chevron had been successful in squashing attempts to get the judgment enforced in the US courts, which is why the plaintiffs turned to Chevron Canada and the Ontario courts. And they found more sympathy there. The Court of Appeal stated that, after all these years, “the Ecuadorian plaintiffs deserve to have the recognition and enforcement of the Ecuadorian judgment heard on the merits in an appropriate jurisdiction.” Although this decision is a procedural one and the plaintiffs could still ultimately lose on the merits, it has implications for Canadian and foreign corporations because it indicates that Ontario courts may assume jurisdiction:

Bottom line: Canadian subsidiaries of international corporations involved in activities on foreign soil that can result in environmental liability may ultimately be called on to pay for judgments related to that liability.