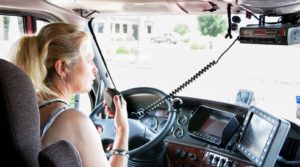 A truck driver with a record of attendance, performance and attitude issues managed to hang onto her job. The beginning of the end came when she was pulled over for suspected impaired driving on the way to work. She told her supervisor that she was late because of “truck problems” and maintained the denial at the hearing even though it was clearly false and the union steward urged her to tell the truth. “Everybody should mind their own f*** business,” she exclaimed. Concluding it could no longer trust her, the company fired the driver. The union appealed but the New Brunswick arbitrator tossed the grievance even though the driver was now vaguely suggesting she had an alcohol problem. She wasn’t fired for DUI but for failing to tell the truth, admit her wrongdoing or take any steps to deal with her “self-confessed alcoholism,” the arbitrator reasoned [International Brotherhood of Teamsters, Chauffeurs, Warehousemen, Helpers and Miscellaneous Workers, Local 927 v Fundy Regional Service Commission, 2021 CanLII 110245 (NB LA), November 1, 2021].