Ok to Fire Bakery Worker for Peeing in Sink 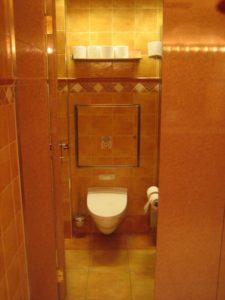 A female bakery worker caught a male worker urinating into a floor sink in a janitor’s room. When confronted by the employer, the worker initially denied the act but then admitted urinating in the sink several times. The employer asked if he had a medical condition that required an accommodation. The worker provided a doctor’s note that just said he needed regular bathroom breaks. So the employer fired him. The arbitrator noted that the bakery had a washroom the worker could’ve used. His conduct ignored basic rules of “civilized behaviour,” which is especially troubling in a food industry setting. And his alleged medical condition didn’t justify his reckless conduct. So the arbitrator upheld his termination [X v. Y (Termination Grievance), [2012] B.C.C.A.A.A. No. 103, July 23, 2012].