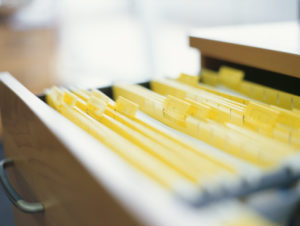 Safety professionals generally aren’t paper-pushers. Nonetheless, managing a company’s OHS program often generates a lot of documents and records. As tempting as it may be to occasionally clean house and discard some of these records, doing so could be a big mistake. That’s because the OHS laws require employers to maintain certain records for certain periods of time. In addition, you may need some of those documents to prove that the company exercised due diligence if it’s charged with a safety offence. Here’s a look at why you need to keep safety records, which records you should keep and how long you should keep them.

WHY YOU SHOULD KEEP RECORDS

There are two basic reasons for keeping safety records:

Comply with OHS laws. The OHS laws often require employers to retain certain types of records and documents, such as training records, JHSC meeting minutes, OHS policies, etc. This recordkeeping duty may be included in an employer’s general duties. For example, under the federal Canada Labour Code, employers must keep required health and safety records in the prescribed formats. Or if the employer is required to implement an OHS program, that program may need to include procedures on maintaining records. (See the chart at bottom for an employer’s general recordkeeping duties under each jurisdiction’s OHS law.)

But the recordkeeping duty typically arises in the sections of the OHS regulations regarding specific kinds of records. For example, under Sec. 21 of Alberta’s OHS Regulation, employers must maintain a current list of the blasters they employed, including each blaster’s name, the issuer of the permit, permit number and permit expiration date, and make that list readily available to an OHS officer upon request.

In fact, OHS inspectors generally have the power to demand certain records when they conduct workplace inspections or investigations after a safety incident. For example, in BC, OHS officers may inspect relevant records and temporarily remove them to make copies or extracts [Sec. 179(3)(f) of the Workers’ Compensation Act]. Failing to provide a record requested by an inspector can lead to a safety violation or charges of obstruction.

Prove due diligence. Certain records may be invaluable to proving that your company exercised due diligence when charged with a safety offence. For example, records can be used to show that you took steps to address identified safety hazards and provided adequate training to workers.

Example: A mining worker was killed when he fell through an open hole while conducting a post-blast clearance gas check. The mine was charged with three OHS violations, including failing to properly train workers on performing gas checks safely. The court dismissed the training charge. It noted that the mine had produced training records for the two workers involved in the incident that indicated that both workers were well aware of the procedures for post-blast clearance checks [R. v. Placer Dome (CLA) Ltd.].

Conversely, not having adequate records can undercut your attempts to prove due diligence.

Example: A temporary worker for a salvage company fell approximately three metres from an opening in a wall onto a pile of pipe, breaking a leg and three ribs. His employer was convicted of several safety violations. Among other factors that led to a finding of no due diligence, the court noted that although the company claimed that it provided workers with a safety orientation, it had no documentation to prove that claim [R. v. Canadian Consolidated Salvage Ltd. (Clearway Recycling)].

Insider Says: For more information specifically on training record requirements under the OHS laws, see “Safety Training Records: The Records You Need & How Long to Keep Them,” Jan. 2010, p. 1.

WHICH RECORDS TO KEEP

Make sure to check the OHS laws in your jurisdiction for the specific records they may require you to keep. But in general, the records or documents most employers across Canada should retain include the following:

Insider Says: You probably have most of the above records in a paper format. But keeping paper records, especially for a large company, can quickly become overwhelming and exceed your storage capacities. However, you don’t necessarily have to keep the originals. Instead, you can scan the original documents and keep electronic versions, which is much more convenient for most workplaces.

How Long to Keep Your Records

Ideally, you should keep all your records for as long as possible. And with electronic storage of documents, it’s become more practical to do so. But if you want to limit the time you keep safety records, make sure you at least comply with any retention requirements in the OHS laws. When the safety laws require employers to keep specific records, they also typically spell out how long those records must be retained, which can be anywhere from one to five years.

In addition, it’s good practice to keep all records relating to particular workers for at least as long as a worker is in the company’s employ. And after a worker leaves the company, the most prudent course is to keep his records for at least another five years.

Every company generates some sort of safety records. You want to make sure that your company keeps these records to comply with the OHS laws and as evidence of due diligence if needed. It’s also important to be able to easily access any records demanded by an OHS inspector. By incorporating recordkeeping in your OHS program, you’ll ensure that your company has the safety records it needs when it needs them.