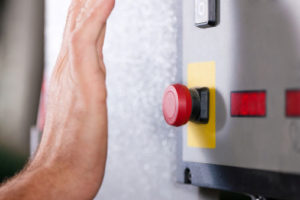 Getting workers to report safety incidents is hard enough; getting them to report near misses can seem impossible. As a result, many near misses go unreported. But near misses are a valuable source of information for safety coordinators as they provide an opportunity for you to identify hazards or weaknesses in your OHS program and make corrections to prevent future incidents. Two papers from researchers at the Wharton School at the University of Pennsylvania provide some insight on how to effectively manage near misses. We’ll tell you what these papers have to say and how to apply their findings in your workplace.

MODEL REPORTING FORM: Download a Model Near Miss Reporting Form you can adapt for use in your workplace.

LEARNING FROM NEAR MISSES

The Wharton School researchers explain that it’s long been recognized that by focusing on minor incidents, such as near misses, it’s possible to reduce the probability of having major incidents. Think of the well-known safety pyramid. Near misses, which are at the base of the pyramid, occur much more frequently then serious incidents. They’re also smaller in scale, often simpler to analyze and easier to resolve. And usually each major incident can be linked to a number of minor ones that happened earlier. So by addressing the causes of these precursor events effectively, you can avoid more serious—and costly—incidents and/or minimize the damage that they might cause if they occur.

Example: Several rows of shelving collapse in a storeroom. No one is hurt and only minor property damage is done. However, an investigation into this near miss or minor incident may reveal that the shelves collapsed because they weren’t installed properly, were damaged or were overloaded. Once you know what caused this incident, you can take steps to prevent a similar collapse from happening in the future, such as by ensuring that shelving is properly installed, repairing or replacing damaged shelving or setting rules for storing materials on shelves to prevent overloading.

COMPONENTS OF EFFECTIVE NEAR MISS MANAGEMENT

The Wharton researchers conducted over 100 interviews of employees at all levels of various Fortune 500 companies and concluded that there are eight components of an effective near miss management program:

1. Broad Definition of Near Miss

The first step is identifying what constitutes a “near miss.” So you need a clear definition of this term. And everyone must be trained on this definition and how it applies in the workplace. The researchers recommend that your definition of “near miss” be broad and cover a wide variety of events, such as:

The researchers note that there’s merit in distinguishing these categories and addressing them by different means. But because the overriding objective is to improve workplace safety, encompassing these events in one broad definition is also beneficial.

The recommended definition: “A near miss is an opportunity to improve health and safety in a workplace based on a condition or an incident with potential for more serious consequences.”

The OHS laws, either directly or implicitly, require workers to report near misses. (The chart below notes the language in each jurisdiction’s OHS act that contains or suggests this requirement.) But workers may still be reluctant to report near misses. They may be afraid of being disciplined if the near miss involved a violation of your safety rules or procedures. Or they may not believe management will actually do anything to improve safety if they report a near miss. So they stay mum about their close calls.

To overcome workers’ reluctance to reporting near misses, train them on the value of near misses and their role in properly managing these events. This type of training should cover the following:

But the researchers don’t recommend that you allow anonymous near miss reporting for two reasons. First, it’s often necessary to follow-up with the person who reported the event to determine its root cause. Second, anonymous reporting suggests that near misses are unfavorable and undesirable events.

MODEL REPORTING FORM: Click here to download a Model Near Miss Reporting Form you can adapt for use in your workplace.

Once a near miss is reported, you need to prioritize it. This critical step determines:

Not all near misses are high priority nor are all of them low in priority. But although labelling a large number of near misses as high priority may overburden the management program, having all near misses as low priority items prevents identification of major issues. And if a seemingly simple, low priority near miss happens too often, it should increase in priority. So it’s important to monitor the system to ensure that near misses are properly prioritized. Adequate training of those people who’ll most likely determine the priority of a near miss when it’s reported, such as supervisors or members of the JHSC, can help you achieve this goal.

Information about the incident should be distributed to the people who’ll be determining its cause. Who the appropriate people are will depend on the priority and nature of the near miss. So develop distribution procedures for various priority levels. But keep in mind that the goal is for the information to:

Next, you need to identify both the direct and root causes of the near miss. If the causes aren’t readily apparent, you may need to form an investigative team to look into the event. But conducting a root cause analysis of a near miss is no different than doing one for an incident in which a worker was injured or killed.

For each identified cause of a near miss you need to identify a solution. In some situations, several causes can be corrected with a single solution. In others, there may not be a feasible, effective solution to eliminate the hazard, so you may need to take a less than ideal corrective action. Generally, for an identified near miss, safety improvements can be ranked from most to least beneficial as follows:

Once you identify the necessary solutions, you should implement them and inform anyone affected by the particular near miss, such as workers and supervisors who work with the equipment involved or in that section of the workplace. And if the solution includes new or revised safety procedures, make sure to train all workers who’ll have to use these procedures.

Implementing the solution to a near miss isn’t the end of the process. You should carefully monitor the changes made to ensure that they effectively address the causes of the incident. In addition, remedying one problem can sometimes create other unforeseen hazards, particularly for subtle changes. Thus, managing these changes and ensuring no new hazards are created is critical to the success of a near miss program. And make sure that the person who reported the near miss is aware of the outcome of this process.

Near misses are a largely untapped safety improvement resource, say the Wharton researchers. An effective near miss management program can help you tap the potential of this valuable source of safety information and use it to improve your workplace’s overall OHS program.