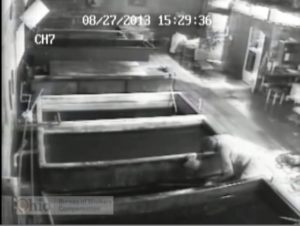 We recently told you about the consequences of faking safety inspection records. Well, employers aren’t the only ones who may fake it—workers may succumb to this temptation, too.

Look what happened to a worker from Cleveland who faked a workplace injury—and got caught on tape doing it.

According to the BWC Special Investigations unit of the Ohio Bureau of Workers’ Compensation, Glenn Jones of Cleveland, Ohio claimed that he suffered multiple significant injuries on the job. But as part of the investigation, BWC’s fraud investigators reviewed the employer’s security video.

On the tape, Jones can be seen stomping a hole in the wooden floor the night before he said he was injured. The next day, he lowers his foot into the hole and lies down on the platform, feigning injury. Before lying down to complete his staged accident, Jones looks around, apparently to ensure he couldn’t be seen by his co-workers. But he overlooked the security camera that was constantly observing—and recording—him.

See it for yourself:

Jones pleaded guilty to one count of workers’ comp fraud for filing a false claim. He was put on probation for a year and ordered to perform 80 hours of community service.

As the BWC said, “A person’s character may be best measured by how they act when they think no one is looking.” We couldn’t have said it better ourselves.

Workers can lie about not only whether they were hurt on the job but also their limitations from legitimate workplace injuries. And you may be able to use videotape to show that they’re exaggerating their restrictions.

Learn about the use of video cameras in the workplace, especially to protect workers working alone, and adapt this model video surveillance policy for your workplace.