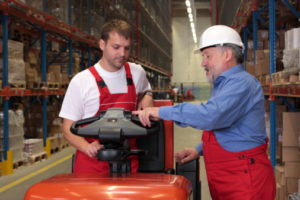 Safety-wise, workers are at their most vulnerable when they’re young (under age 25) or new to the workplace. As a result, the OHS and related laws provide special protections for such workers in addition to the protections provided for all workers. But merely complying with these requirements may not be enough to adequately protect this vulnerable segment of your workforce. Instead, consider going the extra mile by implementing a safety mentor program in which experienced workers are assigned to look after new and young workers. Here’s a look at the steps you should take to implement a successful safety mentor program in your workplace.

THE LAW ON NEW & YOUNG WORKERS

Although new and young workers are vulnerable in many of the same ways, these groups are treated differently under the OHS and related laws.

For example, Manitoba’s Employment Standards Regulations prohibit young workers from doing asbestos work or work in confined spaces. And the federal Canada Labour Standards Regulations bar employers from hiring a worker under 17 to do work that’s “likely to be injurious to his health or to endanger his safety.”

Second, the employment standards laws also limit the hours young workers may work, both in terms of the total number of hours they may work and the hours of the day during which they’re allowed to work. For example, young workers are generally barred from working during school hours when school is in session.

Insider Says: For more information on the special protections for young workers, see “Protecting Young Workers: The Special Legal Obligations & How to Comply with Them,” April 2009, p. 1.

Mentoring is the pairing of an experienced or skilled worker (the mentor) with a new or young worker who’s inexperienced (the mentee). The mentor acts as a role model and supports the mentee by sharing knowledge, resources and advice and answering questions. Mentor programs can take various forms. But in general, to establish a mentor program for your workplace, take the following steps:

It’s important that your mentor program be a formal one with written procedures. The program can stand alone or be incorporated into your OHS program. In any event, you’ll need to develop a policy on how the program will be run. At a minimum, this policy should cover at least the following:

Serving as a mentor should be voluntary. Mentorships won’t work if employees are forced to be mentors under duress. To encourage employees to volunteer to be mentors, stress the benefits for both mentors and mentees from these relationships. See chart below for examples of specific benefits of mentor/mentee relationships for both parties. You might also consider providing other, more tangible incentives for being a mentor, such as a small financial reward or gift card. You should also set basic standards for all mentors, such as minimum length of employment, minimum length in current position, lack of a disciplinary record, positive performance reviews, etc.

Note that not everyone who volunteers to be a mentor will be an appropriate candidate. Effective mentors should possess certain qualities, such as patience, a positive attitude and reliability. So a worker with a short-temper and little patience may not be a good mentor. The button at the bottom of the post features a list of the qualities that you should generally look for in an effective mentor. Use this list when screening volunteers.

One of the keys to a successful mentorship is pairing compatible mentors and mentees. Obviously, when assigning a mentee, the first priority is picking a mentor who’s currently in or previously performed the job the mentee will be performing. But because mentors and mentees will be working closely for extended periods of time, you should also consider personality types and teaching styles to the extent that you can. For example, assigning a very shy mentee to a very assertive mentor could be a recipe for disaster. So try to be sensitive to personality differences and potential conflicts. And although mentors and mentees should try to work out any differences that arise, the program should be flexible enough to make changes when necessary and appropriate.

As with any safety program, you should monitor the mentor program to ensure that it’s effective and is accomplishing its goals. One way to do so is to ask mentors and mentees to complete an evaluation of the program at the end of the mentorship, which typically last from 30 to 90 days. For example, you can ask how each party benefited from the partnership, what skills each acquired or improved and how the program could be improved. Use the feedback from these evaluation forms to assess the mentor program’s effectiveness and make any necessary improvements or changes.

Each year, over 48,000 young workers are injured seriously enough to require time off work. And although they work only 10% of the hours of all workers, they’re injured at a rate of 16%. But what puts young workers at a higher risk of injury isn’t their age or personal characteristics—it’s being new to a job and its associated hazards. In fact, new workers—regardless of age—who’ve been on the job for less than a month had four times as many workers’ comp claims as those who held their current job for more than a year, according to an IWH study. So consider going beyond compliance with the OHS and related laws and implementing a safety mentor program to ensure that new and young workers get off to a safe start in your workplace.