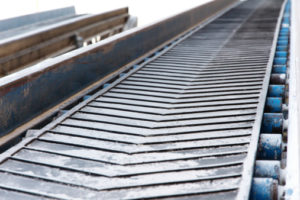 A worker at a manufacturing facility was called to troubleshoot a problem with a moving conveyor platform, which couldn’t be lowered from an elevated vertical position down to the horizontal position. To repair it, the worker removed part of the guarding, crawled under the platform and removed the air line from the pneumatic cylinder fitting. When another worker pushed on the down button, the platform fell down suddenly, striking and pinning the worker underneath. He died from his injuries. An MOL investigation found that insufficient interlocks were in place to protect a worker from the hazard caused by the raised platform. The manufacturer pleaded guilty to an OHS violation and was fined $170,000 [Massilly North America Inc./Massilly Amerique de Nord Inc., Govt. News Release, Feb. 4, 2015].