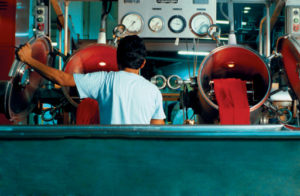 Getting funding for safety initiatives, especially those that aren’t specifically required by the OHS laws, can be an uphill battle. Ergonomics related programs can be a particularly hard sell. You’re more likely to get senior management’s support—financial and otherwise—if you can show that an initiative will improve not only worker health and safety but also the company’s bottom line. One effective way to make such an argument is with a case study of a company that took the steps you’re proposing and reaped various rewards from doing so. Here’s a recent case study from the Institute for Work & Health (IWH) that shows how an Ontario textile plant saved almost $300,000 by implementing a participatory ergonomics program.

What Is Participatory Ergonomics?

For more information, tools and other resources on ergonomics programs, go to the OHS Insider’s Ergonomics Compliance Centre, including:

A participatory ergonomics program encourages workers to help identify the hazards or risk factors in their workplace that can cause or aggravate MSIs, such as working in awkward positions, doing repetitive work and having to apply force. Because workers are the ones actually using the equipment and performing the tasks, they’re in the perfect position to identify what aspects don’t work well for them. Such programs can be implemented as a part of a company’s overall OHS program or as a stand-alone program. And although there are many studies on participatory ergonomics best practices, there are few studies that investigate the costs and benefits of these programs.

The IWH study, which appeared in the May 2013 issue of Applied Ergonomics, looked at an Ontario textile plant that implemented a participatory ergonomics program in 2001. To do so, it set up a worksite ergonomics change team, which included management and union representatives from the plant, as well as two outside expert ergonomists. Team members were trained to use participatory ergonomics principles to identify jobs for improvement, assess the ergonomic risk factors of the identified jobs and come up with solutions.

The team ultimately identified and implemented ergonomics changes for 97 workers in 27 different types of jobs. (The plant employed up to 295 workers.) These changes included adjustments to equipment, workstations and processes. Almost all were low-cost and low-tech changes made by the plant’s mechanics and maintenance staff, such as adjusting workstation heights.

The IWH researchers calculated the financial outcomes of the program over the four-year period from January 2000 to February 2004. This period included three distinct phases:

As for savings, the researchers calculated the money saved by comparing before-and-after numbers for:

Subtracting the participatory ergonomics program costs ($65,787) from the total savings, the company was ahead $294,825 over a four-year period—a benefit-to-cost ratio of 5.5. That is, for every $1 the plant spent on the program, it saved $5.50.

The textile plant case study is a compelling real-world illustration of how small, inexpensive changes can have big impacts on health and safety and the company’s bottom line. As the study team leader Dr. Emile Tompa said, “[Participatory ergonomics] programs can be effective and cost beneficial from a company perspective,” adding that interventions don’t have to be expensive to achieve health and productivity benefits. “Small-scale things— i.e. minor workstation modifications—can yield big returns,” he said. “For example, it came to light in the shirt manufacturer that some of the textile racks were too high for workers to reach comfortably. So the racks were lowered and needless strain was avoided. Many simple changes like this seemed to add up to make a big difference.”