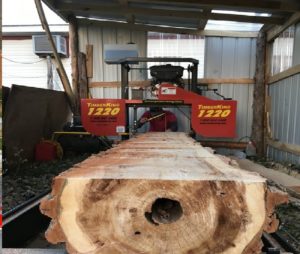 Workers were using an industrial saw machine that cuts round logs into board lumber. The machine broke down and a worker was called to do maintenance on the saw blades. After the saw change was completed, the worker assigned to that task went to the field control box to switch it to “on” so the side canters would close. He didn’t notice that another worker had climbed into the machine and was gesturing with an arm into the area below the canters, which grabbed and crushed his arm. The court convicted the lumber company of failing to ensure a part of a machine was cleaned, oiled, adjusted, repaired or had maintenance work performed on it only when any part that was stopped and could move and endanger a worker had been blocked to prevent movement. The company was fined $48,000 [McKenzie Lumber Inc., Govt. News Release, Aug. 12, 2015].