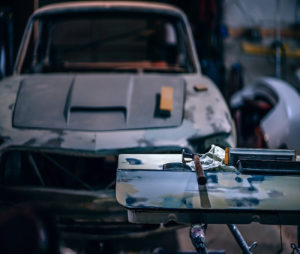 It’s not easy to get workers and others who aren’t safety professionals to regard OHS laws as anything more than technical rules written by faceless lawyers. What too many people fail to appreciate is how safety requirements are conceived in the blood of real life victims. The sad truth is that behind almost any OHS law is one or more actual worker who suffered a tragedy that probably wouldn’t have happened if the requirement had been in place.

As Exhibit A, consider what happened to GM journeyman millwright Daniel Smith over 2 decades ago (April 4, 1991).

Daniel was a 10-year plant veteran who worked in the chassis area. After asking for a shift change, he was reassigned to night shift in the body shop.

He began his fourth day of the new shift at 10 pm on April 3.  His assignment: Change some bushings on the load end lift of Conveyor 4 in the motor rail area. He wasn’t sure which bushings needed to be changed so he asked a colleague, watched parts cycle through the conveyor for about 15 minutes and then left.

At about 11 pm, Daniel returned and asked the tooling supervisor to show him where the bushing block was. Then he went to the maintenance supervisor’s office to fetch his tools. He came back about midnight, just as the operator of Conveyor 4’s shift was ending. About 30 minutes later, Daniel told Patrick Parker, the electrician assigned to Conveyor 4  that he had to replace some bushings and pointed out the area he’d be working in.

A few minutes later, with Parker at the lift control, his back turned to the conveyor, the lift activated, rose up and struck Daniel squarely in the head. He was rushed to the hospital but pronounced dead on arrival.

The fact that the tragedy occurred in the US doesn’t in any way diminish its relevance or emotional impact for those of us north of the border. It was just a year after the Occupational Safety and Health Act (OSHA) lockout tagout rules had taken effect, including the requirement that  employers establish a procedure that “clearly and specifically” lists the methods they use for controlling hazardous energy during the servicing and maintenance of machines.

GM actually did have an energy control procedure that listed all of the specific elements required by the standard, including methods to shut down machines, place and remove lockout or tagout devices and verify the effectiveness of such devices and other energy control procedures. But OSHA contended that it was too generic to meet the “clearly and specifically” requirement. GM appealed.

In 2008, after more than 10 years of litigation, the citation was upheld. GM’s 3-page lockout procedure was too “bare-bones,” especially given the complexity of the machines in the workplace, the tribunal ruled. The procedure lacked the details necessary “to effectively guide servicing and maintenance employees through the process of fully de-energizing and locking out the equipment.” For example, it told employees to use the “normal stopping procedure” for shutting down machines without explaining what that procedure was [Secretary v. GM, OSHRC Nos. 91-2834E & 91-2950, Dec. 4, 2007].

How the Daniel Smith Tragedy Changed the Lockout Laws

The GM case didn’t just uphold a big fine ($692,000 for lack of specific energy control + 25 other LOTO violations.) It established a new standard for what an energy control procedure must include to meet the “clearly and specifically” requirement. Not coincidentally, these are the same elements that most Canadian jurisdictions require employers to list in their own de-energization procedures, including:

Laws are not static things. They evolve over time as they get applied to actual situations.  Seen in this light, Daniel Smith did not die in vain. His tragic death revealed and resulted in the improvement of LOTO requirements. And while they can never bring back the Daniel Smiths, these evolutionary improvements in OHS laws at least spare other workers from suffering the same fate.

Click here to find out how to avoid citations for lack of details in your lockout procedure.