Lockout Tagout: Are Lockout Procedures Always Followed At Your Workplace? 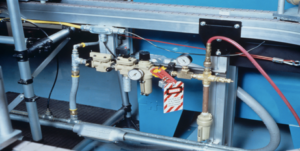 What’s wrong with this operation?

[WARNING: This is a graphic video]

The good news: The electric panel explosion portrayed in this video is only a dramatization.

The bad news: Lockout shortcuts are all too real and common. And so are the fatal and gruesome injuries they cause.Although it’s quite disturbing, this video is very effective in demonstrating how even the slightest shortcut can lead to disaster.

The Moral: 100% compliance with lockout procedures isn’t just a rule but a matter of life and death.

LOCKOUT HAZARDS & HOW TO PREVENT THEM

You wouldn’t perform repairs on an electrical panel if the juice was on. So you de-energize the panel before the work begins to avoid getting electrocuted or burned by arc flash.It makes perfect sense, right?But. . .

Bad Things Can Happen Once You Start the Work

Were Any of These Things to Happen. . .

You’d probably get electrocuted or engulfed in an electrical explosion like the worker in the video.

OHS laws require employers to implement a procedure to ensure these things don’t happen when equipment and machinery are serviced. The procedure must list a method to:

These steps must be taken by a qualified worker with training to implement the lockout and de-energization procedures and work can’t begin until procedures are followed to verify that both of these things have happened.

WHAT WENT WRONG IN THE VIDEO

The worker authorized to implement the lockout procedure in the video was Sean, the guy in the gray shirt. Maybe because he was distracted by his fiancée’s call, he allowed the service worker to work on the panel without verifying that:

And you saw what happened as a result.