Lions and Wolves and Bears—Oh My! 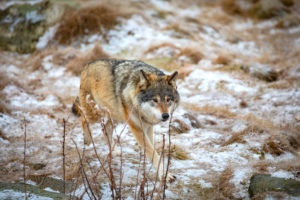 A recent incident involving a 26-year-old worker in northern Saskatchewan is a reminder that employers must take reasonable steps to protect workers from all known hazards in the workplace—including animals.

The kitchen worker at Cameco’s Cigar Lake uranium mine was on break and walking between buildings shortly after midnight when he was attacked by a lone wolf.

Fortunately, a security guard interrupted the attack and scared the wolf away. She also administered first aid. The worker was flown to Saskatoon where he’s recovering and in good spirits.

Other examples of workers attacked by animals and insects on the job include:

To determine if your workers are at risk of attacks by animals (or insects), consider:

If animal attacks are a foreseeable hazard, take appropriate steps to protect your workers. For example, give workers facing possible attacks by bears pepper spray, bear repellent or “bear bangers” (which make a loud noise designed to drive bears away).

And ensure that workers are properly trained on how to avoid animal attacks and respond if an attack occurs anyway. For example, give workers tips on what to do if they see a bear or if one attacks.