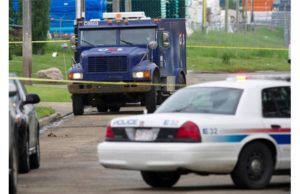 On June 15, 2012, an armoured car with a crew of security guards was at the University of Alberta to restock an ATM machine. One of the guards, Travis Baumgartner, shot his four co-workers, killing three and seriously wounding the fourth. He then fled with nearly $334,000 and was arrested as he tried to cross into the US the next day.

Baumgartner pleaded guilty to murder and attempted murder and was sentenced to life without a chance for parole for 40 years in Sept. 2013.

The families of two of the guards who were killed have sued Baumgartner and their employer, G4S Cash Solutions, for “wrongful death.”

The lawsuits claim that G4S didn’t ensure the guards’ safety and placed them in a dangerous situation, alleging that G4S “failed to ensure that the defendant Baumgartner was psychologically fit to carry out the duties.”

In the wake of the shootings, the union that represents security guards made a similar claim, suggesting that more in-depth psychological analysis might be necessary to help weed out potentially dangerous workers.

Both lawsuits also state that the employer should’ve been aware Baumgartner was inadequately trained, capable of violence, financially insolvent and psychologically unstable, arguing that the company “was not diligent in checking and evaluating his references, work history and background.”

Lastly, the guards’ families state that G4S was negligent when it failed to properly evaluate the risks of the job, offered inadequate OHS training and didn’t “adequately warn and train its staff.”

To protect your workers from violence on the job—including violence at the hands of their co-workers—go the OHS Insider’s Workplace Violence Compliance Centre, which contains, among other resources, information on how to establish an effective threat assessment team.