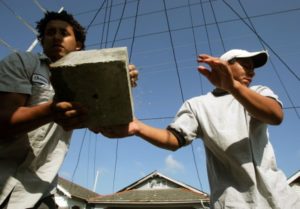 A core component of an OHS program is the company’s written health and safety rules, procedures, policies, manuals, etc. But these documents are no good if your workers can’t understand them because of a language barrier. Similarly, safety signs and training provided in English won’t protect foreign workers who may not be fluent in that language. And such workers are very common in certain industry sectors—often some of the most dangerous, such as construction.

For example, an Ontario court recently noted that language barriers may have played a role in a fatal safety incident.

On Dec. 24 2009, a swing-stage scaffold collapsed, killing four workers and seriously injuring another. The sole owner/director of the company that employed them pleaded guilty to OHS violations and was fined $90,000.

In explaining its sentencing decision, the court noted that although the company provided safety training to workers on the project, the owner failed to ensure that non-English-speaking workers got written material in their native languages [R. v. Swartz, [2012] ONCJ 505 (CanLII), July 13, 2012].

And in Alberta, two workers from China were killed at an oil sands site when a roof collapsed in a large oil tank where they were working. Four other Chinese workers were injured. OHS charges are pending against several companies. It’s likely that one issue to be decided at trial will be whether language barriers played a role in the incident.

So how do you address language barriers in your workplace to ensure that all workers understand your safety training and materials and thus are adequately protected? One option is to provide safety information in a variety of languages. Another option is using visuals, such as pictograms, to convey safety information when possible.

For fatality reports on safety incidents in which language barriers played a role, go to SafetyNow. (You’ll need to be a member or sign up for a trial membership to access this material.)