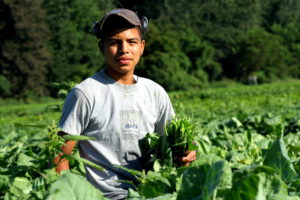 A migrant worker at a tobacco farm was crushed to death by a 1,000 pound bin that fell from a steel bin lift. The Chief Coroner declined to hold an inquest into the incident. His brother sued, arguing that it was discriminatory for construction and mining deaths to trigger mandatory coroner’s inquests, but not those of seasonal agricultural workers. The Human Rights Tribunal ruled that the Coroners Act doesn’t discriminate against migrant farm workers. And an appeals court agreed. The Tribunal reasonably concluded that the high rate of traumatic fatalities and the wide variety of causes of death among construction and mining workers, particularly as compared with seasonal farm workers, justified the need for an inquest in the case of every workplace death of a construction or mining worker but not of every seasonal farm worker. But the court did note some concern that there has never been a single discretionary coroner’s inquest into a seasonal farm worker death in Ontario [R. v. Peart, [2017] ONSC 782 (CanLII), Feb. 7, 2017].