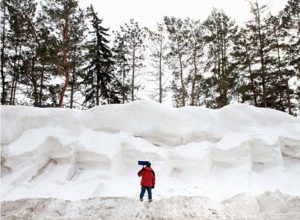 A blizzard blew off tarps covering stockpiles of contaminated soil at a brownfield site, dispersing the soil onto neighbouring properties in the town of Sept-Îles, QC and the Moisie River. The source of the petroleum-impacted soil is the former Moisie military base. The Canadian Department of National Defence had awarded SNC-Lavalin a $3 million contract to remediate the site. Besides assurances to neighbours by the DND that tarps will be more securely tied down on the remaining stockpiles, there’s no plan on dealing with the dispersed contaminated soil.