How to Protect Your “Supervisors” Against OHS Liability 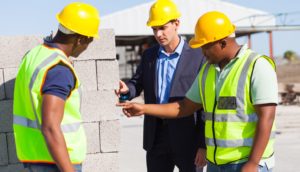 Liability as a supervisor is based on job functions, not job titles.

Once a relatively rare phenomenon, OHS prosecution of supervisors has become fairly common, not just in Ontario but all parts of the country. That makes it increasingly important for OHS coordinators to account for the OHS liability risks faced by the company’s supervisors. But managing supervisor liability is much trickier than it may sound. That’s because individuals at risk of being liable as supervisors include not just foremen, lead hands and such, but also regular workers you wouldn’t think of as being supervisors. Key point: Supervisor liability under OHS laws is based on whether individuals perform supervisory functions even if they don’t have supervisory titles. Here’s a supervisor OHS and liability compliance briefing to help you sort it all out. (Click here to look up the definition and duties of supervisors in each jurisdiction.)

Why Managing Supervisor OHS Liability Risk Is So Important

There are 2 important reasons to ensure your OHS program accounts for supervisor liability:

The OHS laws of all but 4 jurisdictions—Federal, Nova Scotia, Prince Edward Island and Québec—assign separate health and safety responsibilities to “supervisors.” While they certainly overlap, the OHS duties of supervisors and employers (or prime contractors if the site is a construction project) are separate. So, in theory at least, an employer/prime contractor isn’t automatically liable just because one of its supervisors violates the OHS laws.

But in reality, supervisor and employer/prime contractor liability run in parallel. “It’s difficult to imagine a situation in which a supervisor violates a health and safety law without accountability ultimately tracing back to the employer,” explains an Ontario OHS lawyers. That why in most cases when supervisors face charges, the company they work for is almost always a co-defendant. Thus, at the end of the day, ensuring supervisor compliance is part and parcel of ensuring company compliance.

2. Minimizing Supervisor Liability Has Direct Impact on Operations and Morale

OHS fines and administrative monetary penalties (AMPs) against supervisors are almost always significantly less than what an employer would get for committing the same offence. Even so, they can have a devastating impact not only on a supervisor’s personal finances and professional standing but also on workplace morale and productivity. The same is true when individuals get prosecuted as “workers.”

Who’s a ‘Supervisor’ Under OHS Laws?

The 10 jurisdictions that impose specific OHS duties on supervisors also provide a definition of the term “supervisor.” These definitions vary:

Notice that these definitions have one thing in common: They’re based on the functions the person performs in the workplace, rather than the person’s title, pay or perks.

Strategic Pointer: In the 4 jurisdictions that don’t define “supervisor” or list “supervisor” duties (Federal, Nova Scotia, Prince Edward Island and Québec), individuals can’t be charged as supervisors. However, they could still be charged as either a “worker” or an “employer” depending on their actual functions in the workplace.

Focusing on title instead of function when seeking to manage supervisory liability risks can result in mishaps and unforeseen consequences, including:

Worker Is a Supervisor: Individuals who exercise supervisory functions have been charged as “supervisors” even when they didn’t have a “supervisory” title or think of themselves as supervisors. Example: After a worker disabled a lawn mower’s safety device, a crew member got his foot caught in the machine. The Ontario court ruled that the worker could be charged as a “supervisor” even though he didn’t have a supervisory title because there was “ample evidence” of his supervisory authority: He was in charge of the crew, assigned work, answered questions and had influence over who was assigned to him [Ontario (Ministry of Labour) v. Walters, [2004] CanLII 55057 (ON S.C.)].

Company President Is a Supervisor: Sometimes, the “accidental supervisor” isn’t a worker below the rank of supervisor but a much higher-ranking individual, including the company owner or president. Example: A new worker was killed after he got caught in an unguarded pinchpoint in an oven conveyor at a small plastics factory. The company’s president was prosecuted and convicted as a “supervisor” because he assigned work, was in control of hours, wages, bonuses, hiring and firing, conducted worker safety training, controlled production; determined what equipment would be used in the factory and disciplined workers [R. v. Adomako, [2002] O.J. No. 3050].

Plant Supervisor Is Not a Supervisor: The function-over-title rule can also have the unexpected result of a person’s not being a supervisor even though he/she’s called a supervisor. Example: The Ontario court in the Adamako case that ruled that the president was a supervisor found that another individual with the title plant supervisor was not liable as a supervisor because had minimal authority over the other worker at the factory and his charge of the workplace solely consisted of possessing a key to the front door and knowledge of the light switch’s location.

How to Comply: Look for Factors of Supervisory Authority

The good news is that government OHS guidance and court cases flesh out these definitions and make them easier to apply in real-life situations. Rule of Thumb: Supervisors generally have the authority to do one or more of the following (Note: The more boxes you can check off, the better the chances that the person will be considered a supervisor):

Give awards or bonuses;

Determine how workers are paid;

Decide the makeup of a work crew;

Decide which equipment to use;

Discuss details of the job with workers;

Deal with worker complaints; and/or