How to Create a Hazardous Spills Response Plan 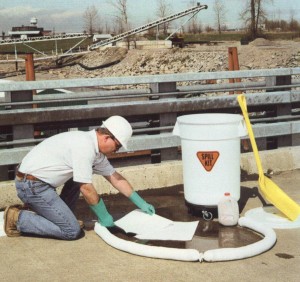 After accidentally dropping a pallet containing a toxic cleaning agent and causing a spill, workers dilute the spilled solution with water and flush the contaminated water down a storm drain. Nobody tells management of the incident. A few days later, a Department of Fisheries biologist notices dead fish floating in the creek where the storm drain discharges. He goes to the plant and asks the manager about the spill. The manager says he doesn’t know anything about it. And he’s telling the truth. But after the biologist leaves, the manager does a little checking and learns what happened. The workers involved reassure the manager that “they took care of” the spill. Of course, they’ve done anything but. The company reports the spill belatedly and is fined not just for failure to report but for not training its workers how to respond to spills properly [R. v. Agrifoods International Co-operative Ltd., [1993] B.C.J. No. 2320].

The Agrifoods spill is the kind of incident that can happen at any company. If and when it does, a prompt and effective response by workers is crucial. Yet, lawyers say that few companies do a good job of preparing workers for spill response. “It’s not that they don’t try,” says an Ontario lawyer. “It’s that spill response planning tends to be patchy and ineffective.” For example, the employer in Agrifoods did train workers to use water to dilute spilled chemicals. But it forgot to tell them to keep diluted chemical out of drains, sewers and surface waters and to report all spills immediately to management. The company paid dearly for these oversights. Here’s how to create effective spill response and containment plan.

Why You Need a Spill Response Plan

Environmental laws require organizations to take response measures to reduce potential harm caused by hazardous spills. Smaller spills generally require containment, clean up and disposal. Larger spills may require the help of government and/or private spill remediation contractors. Some jurisdictions, including ON and the 3 territories, also require a spill contingency plan setting methods for containing different kinds of spills that are reasonably foreseeable at the site. Organizations might also have to file the plan with the government, depending on the kind of operations it conducts.

Whether required by law or as a matter of best practices, just about any organization that uses, stores or handles hazardous substances should create a contingency plan that includes a set of procedures for workers to react to spills. A spill response plan:

What to Include in Your Plan

Plans will vary depending on your operations, the hazardous substances you handle, the laws of your province, etc. But lawyers say that all policies should include some basic provisions:

Tell workers that prompt response and reporting of spills isn’t just a legal requirement but a vital matter affecting public health and the environment.

List steps workers should take in response to a spill. Cover both minor and major spills. “Minor spills typically involve a known substance that doesn’t threaten the safety of the environment or other people,” explains an Ontario lawyer. Many organizations let workers clean these spills themselves, provided they receive adequate cleanup training. Major spills that threaten health or environmental damage say should be handled by a specialized cleanup crew. Additional actions your plan should require for all spills include:

“Every company should have at least one point person who’s responsible for handling a spill, no matter how small it is” says a BC environmental lawyer. Tell your workers who that contact is. This person should make sure that the spill is contained and cleaned up properly and be responsible for notifying the authorities and handling media inquiries, if necessary. Other people who should be notified include the company president, department managers and others directly affected by the spill.

Compliance Strategy: Every province requires the reporting of spills that could harm the environment. But the laws vary as to which spills must be reported and to whom. Check the laws of your jurisdiction and make sure your policy requires your spill response coordinator or another employee to notify the proper authorities.

Some jurisdictions require organizations to complete a spill report form for every spill that occurs on their property. Requiring your workers to complete a spill report form is a good idea even if your organization isn’t located in a jurisdiction that requires one. “You need to have a record of the incident and how the spill was contained,” explains an Alberta lawyer.