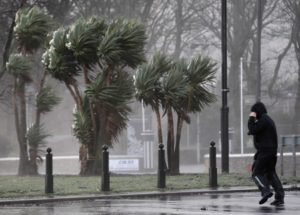 Look what happened to a young worker in New York.

The 22-year-old construction worker was part of a crew installing metal decking on the roof of an automobile dealership. As he tried to secure sheets of decking, he was blown off the roof by a wind gust and fell 24 feet to his death.

OSHA investigated the incident and found that although the worker was wearing a fall protection harness, it wasn’t connected to an independent anchorage point to stop a fall. In addition, the company failed to train workers to recognize fall hazards, ensure adequate anchorage for lifelines and secure decking against displacement by the wind.

High winds can also blow tools, materials and equipment around, endangering workers and anyone in the area.

Example: A couple, their son and daughter were walking down the street when wind blew a bundle of steel off the roof of a construction project, striking the group. The three-year-old daughter died; the husband and son were injured. Two companies pleaded guilty to violating the Alberta Safety Codes Act by allowing an unsafe condition on the worksite. The court imposed the maximum fine—$15,000 [Calgary Herald, Feb. 10, 2011].

And very high winds can even topple over scissor lifts and scaffolding if it hasn’t been properly secured.

So be mindful of any weather conditions that could impact the safety of your workers.

For example, during high winds, workers shouldn’t work on scaffolding, roofs or other elevations. They should also wear proper eye protection to keep dust, debris and other foreign objects from being blown into their eyes. And you should ensure that all materials, tools and equipment are properly secured in windy conditions.