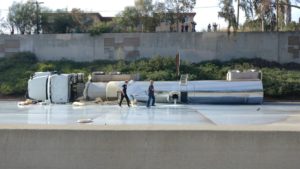 You’ve just discovered an oil slick under one of your trucks. It looks like an oil leak. The truck has been sitting in a gravel lot for at least 3 days. Your mechanic reports that the leak is no more than 24-hours-old. And the discoloration left by the leak appears relatively confined. So, you patch up the leak and clean up the slick by shoveling away the about four to 5 inches of gravel and dirt below the discoloration. Problem solved, right?

If only it were that easy! What you’re looking at is an environmental incident—the release of a hazardous substance into the environment (which, for simplicity’s sake, we’ll refer to collectively as “spills”) Sure, it’s not the Exxon-Valdez. But even a minor spill can trigger important obligations under environmental laws. At a minimum, you must investigate the spill to determine what damage it caused. You must also report the spill to the Ministry of the Environment or other designated government agency in your jurisdiction.

Here’s a look at the fundamentals of spill reporting and a game plan to ensure compliance.

The Law of Spills Reporting

All jurisdictions require persons involved in spills of hazardous substances and environmental contaminants to report those spills as soon as possible. Environmental statutes provide for large fines against organizations that commit reporting violations, with penalties ranging from $100,000 to $500,000 per offence. In Ontario, there are additional penalties of up to $100,000 per day for certain entities that fail to report spills, even if the spill doesn’t have an adverse effect on the environment. I individuals within the organization can also be penalized if they were involved in the reporting violation.

Spill reporting law is very complex because it’s spread out across a number of different provincial environmental laws such as Environmental Protection, Transportation of Dangerous Goods, Fisheries and Clean Water Acts. There are also special reporting obligations under federal law.

The key to compliance is to implement a spills response and reporting policy that provides for determining the 5 essential “W’s” of proper reporting:

1. Who Must Report a Spill

The duty to report the spill of a hazardous substance or environmental contaminant depends on the individual or organization’s (which from now on, we’ll refer to collectively as “person”) role in the spill:

Bottom line: If you know about an unreported spill at your company, you should report it.

2. Which Spills Must Be Reported

While all jurisdictions require reporting of spills and releases that have a harmful effect on the environment, some limit or expand the duty depending on factors such as:

3. Where to Report the Spill

Every jurisdiction has an “emergency spill hotline” that you can call to report a spill. Many also require you to file a written report within a set period of time, usually by a week after the spill. The kicker is that reporting a spill to the government doesn’t always end the matter. In many cases, you must also report the spill to the local police, the property owner and any neighbouring property owners or others in the surrounding area who might be directly affected by the spill.

4. When You Must Report

Spills must be reported immediately after they occur, even if you don’t yet know the extent of the damage and/or haven’t cleaned them up yet. In fact, reporting a spill late can be just as serious an offence as not reporting at all. Example: An Ontario steel mill spills a significant amount of oil into a storm sewer that discharges into the Hamilton Harbour, killing fish and more than 100 ducks and other waterfowl. The mill reports the spill to the MOE within 4 hours. Although that might sound prompt, the company is fined for not reporting on time under (Sec. 30(2) of) the Ontario Water Resources Act [Dofasco Inc.].

5. What You Must Report

Spill reports typically must list the following information—to the extent it’s known or can be reasonably determined:

Bottom Line: You may not always know all of this information at the time you call to report a release. But if you delay your report to get more information, you’ll likely be fined, lawyers warn.