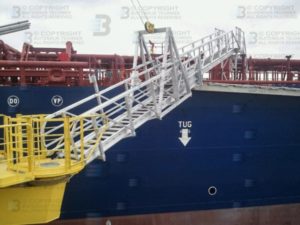 The chief cook for a vessel that was docked fell from the gangway when it moved automatically, breaking his right hip. He sued the owner of the vessel (his employer) and the owner of the gangway for negligence. A court noted that both owners had a duty to ensure the cook’s safety. The gangway posed an unusual danger. But its owner didn’t adequately warn users of the dangers through the horn and warning signs. For example, the signs were confusing—even for an English speaker and even more so for someone like the cook who wasn’t fluent in English. And because the gangway owner’s failure resulted in the cook’s injury, it was liable, concluded the court. However, the vessel’s owner wasn’t aware of the danger the gangway posed and so wasn’t liable. The court ordered the gangway owner to pay the cook $105,000 in total damages [Ranjbar v. Islamic Republic of Iran Shipping Lines, [2014] BCSC 1983 (CanLII), Oct. 22, 2014].