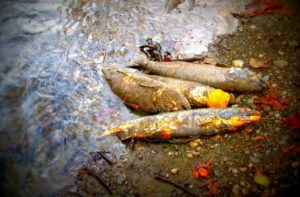 A railway company hired environmental consultants, who provided Fisheries and Oceans Canada with a proposed plan for work on a rail line next to a creek. But the company didn’t follow this plan. For example, the work strayed outside of the pre-determined area, wasn’t completed within the appropriate timeframe, modified the local vegetation and involved more than double the volume of rip rap rock to control erosion than was outlined in the work plan. As a result, the company pleaded guilty to one violation of the Fisheries Act for the harmful alteration, disruption or destruction of fish habitat. The court fined it $5,000 and ordered it to pay $70,000 to the Environmental Damages Fund [BNSF Railway Company, Govt. News Release, March 26, 2014].