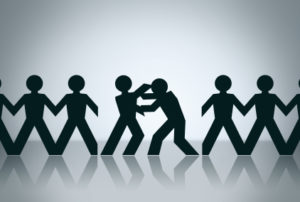 After a verbal altercation escalated into a physical fight between warehouse workers, the employer fired the victim of the assault, a male worker and a female worker. The union filed a grievance on their behalf. (A fourth worker was also fired but his termination wasn’t challenged.) The arbitrator noted that the employer’s policy barred violence in the workplace and workers knew they could be fired for violent conduct. Although the victim participated in the verbal dispute, his only involvement in the fight was defending himself. So he shouldn’t have been fired, concluded the arbitrator. But as for the male worker, he instigated the verbal dispute and engaged in physical violence. And the female worker kicked the victim with steel-toe boots. So the arbitrator upheld their firings [Purolator Courier Ltd. v. Teamsters Local Union, Local 938, [2014] CanLII 34485 (ON LA), June 19, 2014].