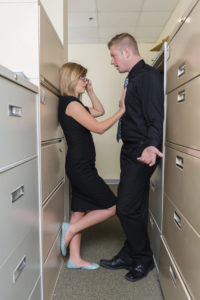 Two young female workers claimed that their male supervisor had, over a period of months, sexually harassed them in many ways, including touching them, giving them sexual nicknames, making sexual comments and sending them sexual photos. They delayed reporting his conduct and didn’t confront him directly because they were afraid of retaliation. When they did come forward, the supervisor admitted most of the allegations but claimed the workers were his friends and he had no reason to believe his conduct offended them or made them uncomfortable. An arbitrator disagreed, upholding his termination. The supervisor’s conduct constituted serious sexual harassment. And he should’ve known his conduct was totally unacceptable. The arbitrator added, “It is hard to fathom what perverse pleasure a 51 year old supervisor could get out of shocking and disgusting two young females who could, given their ages, be his daughters…His egregious conduct with young, vulnerable females who were under his supervision, and about which he was not (before the Hearing) prepared to apologize or express any remorse, demands that his employment be terminated” [Union of Calgary Co-operative Employees v. Calgary Co-operative Assn. Ltd., [2016] CanLII 39729 (AB GAA), June 26, 2016].