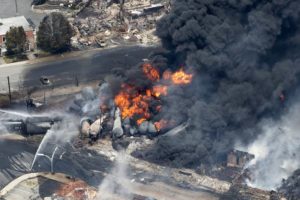 On July 6, 2013, a train carrying 72 cars of crude oil derailed and exploded in Lac-Mégantic, Québec. Although no workers were injured or killed, the explosion and resulting fires killed 47 people. The derailment also caused massive destruction and millions of litres of oil being dumped into a nearby river and lake. On Aug. 19, 2014, the Transportation Safety Board of Canada (TSB) released its final report on the incident, its causes and recommendations for preventing similar tragedies in the future. Here’s an overview of that report, focusing on its conclusions regarding the rail company’s culpability. (There’s also an executive summary of the full 191-page report available.)

The Incident: On the evening of July 5, 2013, a Montreal, Maine & Atlantic Railway (MMA) train arrived at Nantes, Québec, carrying 7.7 million litres of petroleum crude oil in Class 111 tank cars. In keeping with the railway’s practice, the engineer parked the train on a descending grade on the main track, applied hand brakes on all five locomotives and two other cars, and shut down all but the lead locomotive. Railway rules require hand brakes alone to be capable of holding a train. But because the locomotive air brakes were left on during a test, there was the false impression that the hand brakes alone would hold the train.

Shortly after the engineer left, the Nantes Fire Department responded to a 911 call of a fire on the train. Once the fire was extinguished, the firefighters and an MMA track foreman discussed the train’s condition with the rail traffic controller and then left. The combination of locomotive air brakes and hand brakes could no longer hold the train, which began to roll downhill toward Lac-Mégantic. At a top speed of 65 mph, the train derailed near the centre of the town at about 1:15 a.m on June 6. About six million litres of crude oil were quickly released. A fire began almost immediately; the ensuing blaze and explosions left 47 people dead. Another 2,000 people were forced from their homes and much of the downtown core was destroyed.

The Investigation: The investigation identified several different causes of the incident, some of which were attributable to MMA and others to the government, specifically Transport Canada. As to the rail company, when the investigation looked carefully at MMA’s operations, it found, among other defects:

It would be easy to point the finger at MMA, which has since filed for bankruptcy, and place all of the blame for this incident at its feet. But the TSB report makes it clear that Transport Canada also bears some responsibility for failing to prevent what happened. For example, Transport Canada’s regional office in Québec had identified MMA as a company with an elevated level of risk that required more frequent inspections. For instance, although MMA normally took corrective action once problems were identified, it was common for the same problems to reappear during subsequent inspections. But the regional office didn’t always follow up to ensure that these recurring problems were effectively analyzed and that the underlying conditions were fixed.

However, the fact is that if MMA had done a better internal job of managing its safety risks and compliance with safety laws, this incident probably wouldn’t have occurred. The TSB’s report noted that an organization with a strong safety culture is generally proactive when it comes to addressing safety issues. But it criticized MMA as being generally reactive. There were also significant gaps between the company’s operating instructions and how work was done day to day, further indications of a weak safety culture. The investigation found that MMA’s poor safety culture contributed to the continuation of unsafe conditions and unsafe practices, and significantly compromised its ability to manage risk. The report makes observations that all companies can learn from: “If instructions or rules are disregarded, and unsafe conditions and practices are allowed to persist, this leads to an increased acceptance of such situations. Deviations from the norm thus become the norm, and the likelihood of unsafe practices being reported and addressed is reduced.”

Insider Says: The TSB report also noted broader failures in terms of the regulation and enforcement of rail safety. For information on the steps Transport Canada has taken to address these failures, see “NEW LAWS: Update on Changes to the Transportation of Dangerous Goods Laws.”