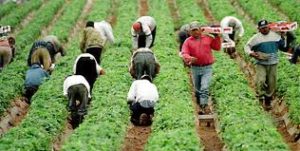 Several migrant workers were running the seed potato cutting line on a farm. They had to remove a conveyor from the line and replace it with a potato hopper, but the hopper wasn’t high enough to reach the conveyor. The workers used bottle jacks to raise the container-frame assembly. A worker who was under part of the jacked-up load was crushed to death when the load suddenly fell. A subsequent MOL investigation found that the assembly was raised beyond the height of the anchor posts, the hopper’s wheels weren’t chocked and the elevated hopper assembly wasn’t blocked to prevent it from falling. The farm pleaded guilty to an OHS violation and was fined $82,500 [RJM Farms Inc., Govt. News Release, Nov. 26, 2015].