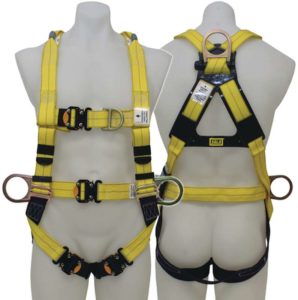 A company that makes and installs grain bin systems and accessories was engaged in an alteration project to an industrial farming operation, which involved the addition of new equipment as well as the renovation of existing equipment. A worker was on top of an existing 30-foot-high grain bin while wearing a fall protection harness attached by lanyard to a newly-installed cushion box at the peak of the bin. The cushion box, which weighed between 100-200 pounds, hadn’t yet been welded in place. While the worker was connecting a metal pipe to the cushion box, the pipe dislodged the box. It slid down the roof of the grain bin and fell over the side, dragging the worker along with it. He fell about 30 feet to the ground and sustained several injuries, including a fracture. The MOL determined that the cushion box didn’t meet the requirements for an independent fixed support. The company pleaded guilty to failing to ensure that a worker had a suitable anchor to tie to and was fined $50,000 [Earl Horst Systems Ltd., Govt. News Release, Dec. 20, 2016].