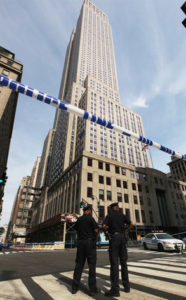 Once again, a beautiful summer morning was shattered by workplace violence.

In an incident that happened earlier today, a worker who was laid off from his job at an apparel importer shot and killed a former co-worker outside the Empire State Building in New York City.

The details are still being gathered, but according to the New York Times, the worker, who has been identified as Jeffrey Johnson, then turned his gun on two officers, who shot and killed him. Nine bystanders were injured but it doesn’t appear that any of their injuries are serious.

Police Commissioner Raymond W. Kelly said that Johnson had worked at Hazan Imports for six years and was laid off a year ago as part of the company’s downsizing. In addition, Johnson and the victim, Steve Ercolino, a company VP, had filed harassment complaints against each other relating to a workplace dispute.