Does the Entertainment Industry Pay Enough Attention to Worker Safety? 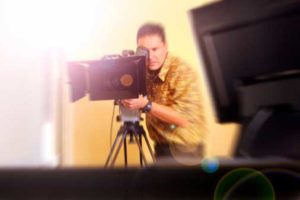 Shooting a movie is complex and requires managing many different aspects of the job, including the acting, lighting, the sets, any stunts, etc. all at once. So where does workplace safety fit into this balancing act—if it’s considered at all? A recent tragedy in the US has raised the issue of safety on movie sets and whether enough is done to protect the workers who work on them.

As reported in the New York Times, Sarah Jones, a 27-year-old camera assistant, died on the set of an independent film in rural Georgia on Feb. 20, 2014. She was helping to prepare a shot that involved placing a bed across the tracks of a railroad line.

After two trains passed, crew members apparently thought they had a safe interval to get the shot. But a third train appeared, moving at high speed through the set, killing Jones and injuring others.

The incident is under investigation by several entities, including OSHA, the National Transportation Safety Board and the sheriff’s department in Wayne County, GA, where it occurred. In addition, Jones’ parents have hired a Savannah law firm to conduct a private investigation.

The focus of these investigations will be what went wrong. For example, were the movie workers on the tracks without permission from the railroad company? Should the railroad have slowed or stopped the third train after the first two passed the gathered film crew? That is, should the railroad’s employees have seen the potential for a problem and taken steps to prevent it?

Another issue is who exactly is in charge of ensuring safety on movie sets.

In the Times piece, C. O. Erickson, a veteran line producer, said that the biggest Hollywood films are overseen by studio safety officers who check and crosscheck potentially hazardous situations. But smaller productions, he said, rely heavily on the professional skills of production managers and, especially, assistant directors, who check details that might escape a harried director.

Safety issues in the entertainment industry are hardly limited to movie sets or the US:

OHS regulators in Canada are trying to improve workplace safety in the entertainment industry, although it’s certainly not a focus of their efforts.

For example, prompted by the death of a Cirque du Soleil performer in Las Vegas when her safety wire snapped, Ontario’s MOL released revised safety guidelines for the live performance industry that cover: