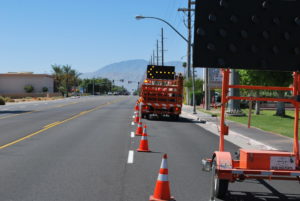 A driver who struck and killed an 18-year-old flagger on her first day on the job was convicted of dangerous driving causing death. He’d been travelling at a speed of 90-100 kph and passed two semis despite signs prohibiting passing in the construction zone and requiring a reduction of speed to 60 kph while passing construction workers. The court sentenced him to two years minus a day in jail and a three-year ban on driving once he was released. The driver appealed. But the appeals court upheld his conviction and sentence. The trial court had reasonably found that his driving was a marked departure from the standard of care of a reasonable person as he was in a construction zone, didn’t observe the signs that required him to slow down and not pass vehicles, didn’t slow down and was inattentive for a prolonged period of time. Lastly at sentencing, the trial judge considered the relevant factors and principles, and the sentence imposed wasn’t unfit [R. v. Dunford, [2017] S.J. No. 7, Jan. 9, 2017].