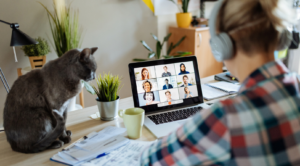 Just like on-site workers, telecommuters may suffer injuries while carrying out their work duties. And that raises what in these pandemic times is literally a billion-dollar question: Does workers compensation cover injuries that occur in a home or remote location away from the main office or facility? Consider this scenario, which is based on an actual case from Québec.

A customer agent who gets permission to work from home sets up a workstation on the second floor of her home. During work breaks, she unplugs and goes downstairs. Since she’s unavailable to answer calls, she doesn’t get paid for this time. While descending the stairs for a lunch break, she loses her balance and falls hard on her side, sustaining serious injuries to her back and neck. She files a workers compensation claim but her employer contends that the injury isn’t covered because it didn’t arise out of her employment.

Is the worker’s injury covered by workers compensation?

Workers’ compensation provides benefits for workers who suffer work-related injuries. The rule: Injuries are covered if they “arise out of” or “in the course of” their employment. According to the Québec labour tribunal, “a worker who carries on his employment in telework mode, at home, must benefit from the same [workers compensation] protection of regarding the concept of in connection with work as a worker who carries out his work in the employer’s establishment.” While relevant, where an injury occurs is just one factor in determining work-relatedness of an injury. Others include:

The tribunal concluded that the worker in this case was carrying out her employment when the injury occurred. The entire reason she was at home at that particular time was that she had to do her job. And the accident happened moments after the worker ended a business call [Air Canada and Gentile-Patti, 2021 QCTAT 5829 (CanLII), December 3, 2021].

A is wrong because workers compensation covers injuries suffered as a result of work activity even in locations outside the employer’s control. Workers have thus received benefits for injuries in locations such as hotel rooms, convention halls and parking lots managed by third parties and, yes, home offices (Example: Desrochers et Agence du revenu du Canada, [2011] QCCLP 7562, November 21, 2011].

C is wrong because breaks are an essential part of the work schedule set by the employer. Even though the worker was technically off the clock, the tribunal reasoned that the activity of going on break was directly connected to her job performed for her employer’s benefit and not personal reasons.

D is wrong because workers’ compensation doesn’t cover any injury a telecommuter suffers at home, only those that occur while employment activity is carried out. So, for example, the worker’s injuries wouldn’t have been work-related if the fall down the stairs occurred after rather than during her shift.