Did Employer Do Enough to Protect Bus Driver from Second-Hand Smoke? 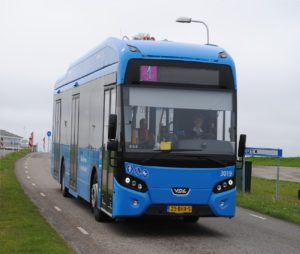 A bus driver complains to his employer about his exposure to second-hand smoke from passengers. Public health law bars smoking on the bus and the employer has posted signs that inform passengers they can’t smoke on the bus. But the driver says when he picks up passengers who’ve been smoking, they blow smoke at him as they exhale or talk to him while entering the bus. He also asserts that when individuals smoke at the bus stop while waiting to be picked up, some of the smoke enters the bus as he arrives and opens the door for passengers. But he doesn’t provide any evidence as to how exposure to this smoke has impacted his health. The driver’s family doctor suggests he wear a mask while working to prevent his exposure to second-hand smoke but he fails to do so. The employer agrees to add signs to the outside of the bus indicating smoking is prohibited on the bus. But the driver argues the signs aren’t enough to protect him from this workplace health hazard.

Is the employer required to do more to protect the driver from the second-hand smoke?

A. Yes, because the signs don’t eliminate the workplace health hazard caused by the second-hand smoke.

B. Yes, because the public health law bars smoking on public buses.

C. No, because the employer has a duty to protect workers from safety hazards only, not health hazards.

D. No, because the employer took all reasonable precautions to address the hazard.

D. The employer has taken all reasonable action to protect the worker from the workplace health hazard caused by second-hand smoke and so doesn’t need to take additional steps.

This hypothetical is based on a Nova Scotia Labour Board ruling that upheld a dismissal of a bus driver’s complaint regarding his employer’s failure to address exposure to second-hand smoke. The Board found that the driver had “utterly failed” to provide objective evidence that occasional exposure to smoke exhaled by entering passengers or wafting into the bus from the bus stop threatened his health in any way. The Board noted that the driver failed to follow his own family doctor’s advice to wear a mask despite his alleged concern for his health due to this smoke exposure. Concluding that there was no support for his allegation that his workplace was unsafe, the Board ruled that the employer had fulfilled its duties under the OHS law.

A is wrong because an employer isn’t required to eliminate all workplace hazards. The OHS laws and basic due diligence principles require employers to take all reasonable precautions to protect workers from workplace health and safety hazards. This mandate doesn’t guarantee the worker’s workplace will be completely devoid of all hazards. The preference under the law is to eliminate hazards whenever possible. But the OHS laws recognize that some hazards can’t be eliminated. In that event, employers must implement administrative measures, such as safe work procedures, or require workers to use appropriate PPE to protect them from such hazards. In this case, the employer can’t ban smoking by members of the public outside its buses, in open public places. So it can’t eliminate the hazard that might be created for workers if second-hand smoke does waft into the workspace—in this case, the bus. Thus, the employer’s posting of signage inside and outside of buses warning passengers that smoking is barred onboard is an appropriate and reasonable administrative measure to protect the driver from that hazard.

C is wrong because the OHS laws require employers to protect not only workers’ physical safety but also their health. (In fact, the “H” in “OHS” stands for “health.”) Second-hand smoke may not threaten a worker’s immediate physical safety like a rickety ladder but it can threaten a worker’s long-term health. The OHS laws, therefore, require employers to provide reasonable safety measures to avoid or minimize the risk of exposure to such smoke. In this case, as already noted, the employer did take reasonable precautions concerning the bus driver’s exposure to second-hand smoke.