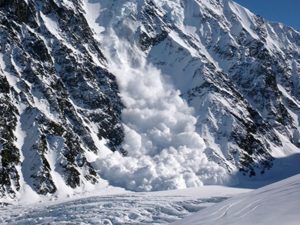 Workers whose jobs take them into Canada’s backcountry, especially in AB and BC, are at potential risk of serious injury or death in avalanche terrain. That’s why WorkSafeBC recently reminded employers of the need to identify, assess and mitigate avalanche risks.

Since 1998 in BC, avalanches have caused three worker deaths and 50 accepted time-loss injury claims, including three injury claims in the first nine months of 2016. Although most workers injured were in occupations within the ski hill and winter lodge industries, a land surveyor and a truck driver were also injured.

The risk of avalanches could also impact the primary resource, construction and adventure tourism industries as well as forest service roads, highways, and backcountry areas.

Avalanche risk can be present all year in some areas and snow stability can change daily, hourly or even sooner depending on sufficient snow depth, steep-enough terrain and the right weather conditions.

WorkSafeBC’s OHS Regulation specifically requires all employers whose workers travel through, work around or within a potential avalanche hazard area to have a qualified person conduct a risk assessment and if there is risk of an avalanche, develop and implement appropriate avalanche safety plans and/or a program.

Want access to all the Canadian safety compliance resources that the OHS Insider has to offer, such as the checklist mentioned above, and much more? Sign up for a free trial membership now! [/box]